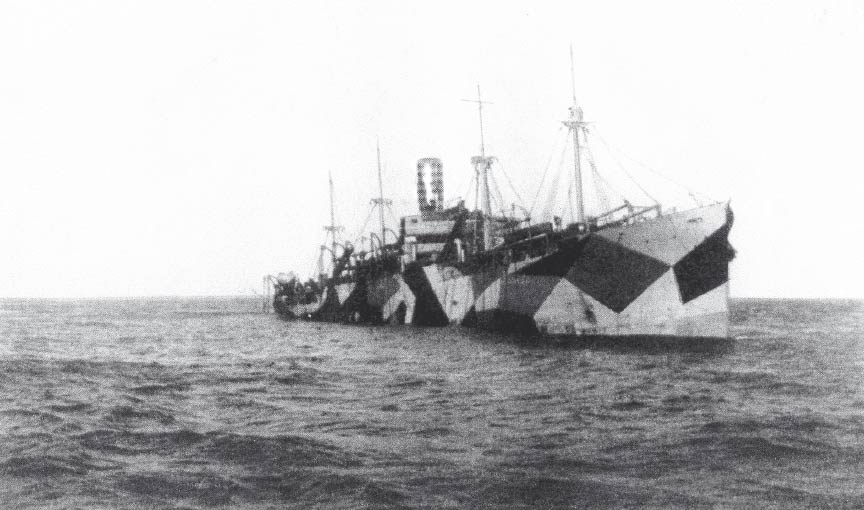 The wake of a torpedo was seen at 16.30 hours by one of Ausonia’s five lookouts 150 yards off the starboard beam as the vessel was zigzagging making good a mean course S 71° W (magnetic) at about 12½ knots. The torpedo struck abreast of the No. 5 hold from 10 to 15 feet below the waterline. The vessel filled aft at once, flooding the engine room and magazine and she began to settle by the stern, whereupon her Master (Commander Robert Capper, RNR) gave orders to make ready the lifeboats and prepare to abandon ship.

The W/T apparatus was rendered useless in the blast so an SOS was sent out using the emergency wireless, but no reply was received as the apparatus had a range of only 100 miles. Before leaving the ship, Commander Capper threw all the confidential documents and papers overboard in a weighted bag in compliance with Admiralty instructions. The ship was armed with two 7.5in howitzers, one on either side, and one 4.7in quick-firing gun, but there was no target to fire at before the Ausonia was abandoned. Nine lifeboats, containing 141 surviving crew members, were lowered, two of which had been damaged in the explosion and were abandoned at once with their occupants being distributed among the other boats. At 17.40 hours, as the lifeboats stood by, the U-62 surfaced and closed to within 1,000 yards of the ship before opening fire with about 50 rounds from its 4.1in and 3.4in deck guns, of which roughly 40 took effect.

Image: The SS Ausonia painted with wartime dazzle camouflage, settling down by the stern. Image taken from U-Boats Westward! by Ernst Hashagen

READ MORE ABOUT THE SS AUSONIA - BUY THE BOOK ONLINE