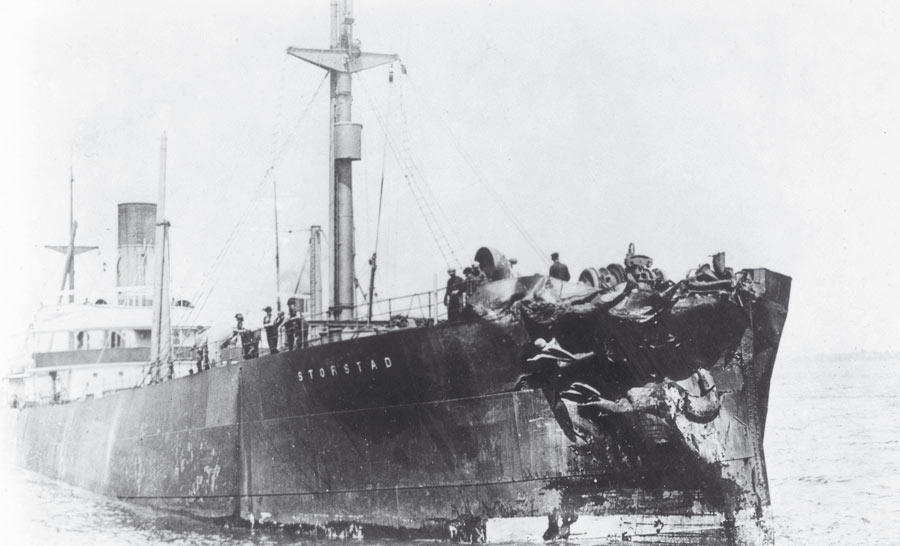 The 6,028 gross ton Storstad of Khristiania (Oslo) was sunk by torpedo and gunfire from the German submarine U-62, commanded by Kapitänleutnant Ernst Hashagen, on 8th March 1917, approximately 84 miles west from the Fastnet Rock Lighthouse in position Lat 51° 20′ N, Long 11° 50′ W.

The Storstad was steering a course N by E making 8½ knots when the report of gunfire was heard at 10.30 hours and the U-62 was observed seven points on the starboard side three to five miles distant. Storstad’s Master (Mr Thomas Andersen) ordered the engines to be stopped and the Belgian Relief signal flag and ball hoisted on each mast.

Having fired 15 shells from its 4.1in gun in quick succession, which fell close to their target, the U-62 dived and the steamer remained stationary. After a delay of 30-40 minutes, the wake of a torpedo was seen about 100 yards off the port beam before it struck the Storstad’s No. 2 hold two feet below the surface with ‘extreme’ force. Captain Andersen immediately ordered the crew to muster at the lifeboat stations and prepare to abandon ship. The three boats pulled clear without mishap and stood by. Roughly half an hour after the torpedo was fired the U-62 surfaced and began to shell the ship. The U-boat signalled Captain Andersen to come alongside as the shelling continued and, as his boat drew near, the German naval Ensign was raised.

By now the wind had increased to gale force with high seas and rain so Captain Andersen asked the submariners to assist his crew by towing the boats nearer to land. He was then questioned as to his destination and cargo to which he replied that it was maize for Belgian Relief under the protection of the American Consul in Rotterdam. He also repeated his request for a tow towards land but was ignored. The U-62 closed the Storstad on her starboard side and began shelling to hasten her demise. The bombardment continued until 12.10 hours when the ship went under, after which the lifeboats began to pull towards land. Over the course of the attack on the Storstad, the U-62 had expended between 70 and 80 shells.

Towards evening the wind increased to storm force with very high seas and the boats were held into the wind by sea anchors and oars. Oil bags were also hung out. During the night the winds increased still further from the SE accompanied with hail and heavy rain, so the crews laboured to keep the boats from being swamped in the deluge and raging sea. The crews’ efforts to keep the lifeboats together were in vain and they became separated in the darkness. By the following morning the wind had veered westerly and the weather began to moderate.

The lifeboat containing the Master and 12 hands was found by HM armed trawler No. 816 Reindeer II at 22.00 hours on 9th March three miles south-west from Bray Head. The Reindeer II proceeded to Berehaven and landed the men at Castletownbere at 05.00 hours the next day. On 10th March at 07.00 hours the Irish Lights tender Ierne (1897–1954), on passage to the Skelligs, encountered the boat containing First Officer Harald Hansen and 13 hands. The men were taken on board, and with the lifeboat in tow she proceeded to Valentia.

After landing the survivors, Ierne hove up and returned to sea to join the search for the two other boats. The remaining boat containing Second Officer Anders Nilsen and 10 hands was found by HM Coast Guard cruiser Safeguard at 13.30 hours on 10th March, one mile off Ducalla Head and the survivors landed at Valentia. Three of the Storstad’s crew died of exhaustion and exposure before reaching land, two died in the lifeboats, one of whom became deranged before he died, and the Fourth Engineer died on board Reindeer II despite intense efforts to save his life.

Captain Andersen and his surviving crew travelled on to Liverpool where on 15th March affidavits were taken before the Norwegian Consul and two assessors into the sinking of the Storstad. One of the assessors present at the inquiry was the Master of the late 1,870 gross ton steel barque Storenes of Khristiansund, which was sunk on 1st March 1917 by the UC-43, 18 miles south-west of the Old Head of Kinsale.

The Storstad had sailed from Buenos Aires on 13th January 1917 (via Gibraltar for route instructions) bound for Rotterdam with a cargo of 9,900 tons of maize destined for Belgian Relief and under the protection of the American Consul in Rotterdam.

Three years earlier the Storstad had been involved in one of the world’s worst peace-time disasters, when on 29th May 1914, laden with 11,000 tons of Nova Scotia coal, she collided with the 14,000 gross ton Canadian Pacific liner Empress of Ireland in dense fog in the St Lawrence River.

The sharp, reinforced, vertical stem of the Storstad, pushed by the enormous weight of her cargo, severed the liner amidships from shelter deck to her double bottom. The 14ft-wide gash went 25 feet below the waterline, and when the vessels separated almost immediately, the liner began to fill at an estimated rate of 60,000 gallons per second. The Empress of Ireland sank 14 minutes after the collision seven miles north-east of Father Point in 150 feet of water. Of the 1,477 women, children and men who had left Quebec the previous afternoon, 1,102 lost their lives.

The Storstad’s crew, described as ‘rowing like demons’, did all that was humanly possible to save those struggling in the water, and had it not been for the endurance and superb oarsmanship of the Norwegian sailors, more people would have perished that night in the near-freezing waters of the St Lawrence.

Lord Mersey, who two years earlier had headed the official investigation into the loss of the RMS Titanic, and who would go on to preside over the RMS Lusitania inquiry in June 1915, was appointed to head the public inquiry into the sinking of the Empress of Ireland. His Commission of Inquiry apportioned most of the blame for the accident to one of the Storstad’s officers. The Norwegians duly held their own inquiry at their Consulate in Montreal in accordance with Norwegian Maritime Law. The evidence was forwarded to the Norwegian Maritime Court, which later absolved the Storstad’s officers from all responsibility for the accident.

The sinking of the Empress of Ireland was the Dominion of Canada’s worst disaster and considerable shock and controversy followed in its wake. But the nation’s attention was soon to be diverted by the gathering clouds of war in Europe, and by the time the savagery and unprecedented slaughter that was to follow in the coming years ended, a stunned and war-weary world had forgotten the Empress of Ireland.

Image: The buckled bow of the SS Storstad after colliding with the SS Empress of Ireland. Courtesy Norsk Sjøfartsmuseum